This week is going to be dedicated to more Iqaluit food. We've got a couple more places to write about thanks to a co-worker who visited a few restaurants on her recent trip. (I've got good connections when people remember to take pictures of their food and bring me takeout menus, or even take pictures of actual menus at the table!)

As much as I enjoy talking about food (and I really, really enjoy it!) I think it's important to show these menus because it again emphasizes how expensive it is to eat in Nunavut. I know, I know, you should eat at home instead of going out - but that's not really the point I'm trying to make. I'm just saying that the cost of food everywhere in town, whether it's at a fast food place, or a fancy restaurant, or the grocery store, is still significantly higher than anywhere else in Canada.

I'll split them up over the week so the posts don't get too long and you're not bogged down with too many pictures! 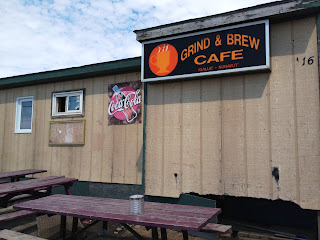 Grind & Brew sounds like it should be a coffee shop, doesn't it? When I first heard the name I envisioned a cozy cafe that is warm and hits you with the smell of coffee when you walk through the door.

The only thing I had heard about the Grind & Brew was that it had better pizza than Yummy Shawarma, so if I was in the mood for pizza I should definitely check it out. Unfortunately I didn't have time to look for it while we were there, but the outside doesn't really look like the cozy coffee shop I was thinking about when I heard its name. 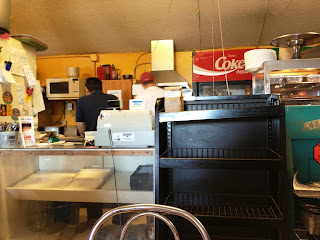 Neither does pizza come to mind when I think of a cafe either, now that I think of it. The inside looks...small and a little dated, but there was a display case where you could buy slices of pizza or you could order off the menu.

My friend decided to try a slice of pizza, which she said was good, but soggy where the toppings were heaviest. Soggy pizza is a huge pet peeve of mine, so that would have made me grumbly. Also, the crust seems really thick - so it's definitely not a thin crust if that's what you're looking for. It looks like the picture on the menu though, so they're consistent! 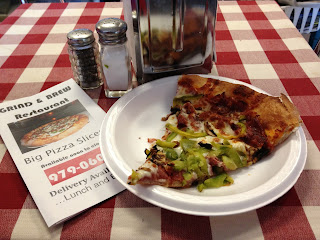 Looking through the menu, I liked that they had some different things - caribou pizza sounds interesting! The Asian food is also a different touch. I don't think they're going to be the most authentic Thai or Chinese food, but it can't be worse than a mall food court, right? It sure is pricey though! 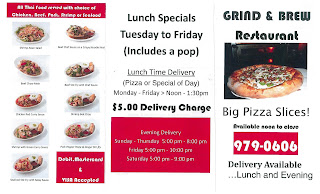 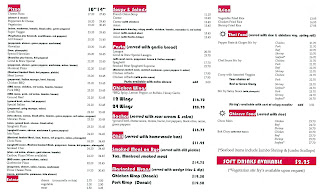 With all these options to go out, Iqaluit sure makes Baker feel even smaller! At these prices though, I'm not sure I'd be rushing out to lunch every day...there's something not quite right about spending $34 for a 14 inch pizza when I know I could get one at home for much, much, muuuuuuch less. (Or better yet, make one with expensive groceries, and still pay less for something that tastes pretty darn good!)

We are a newlywed couple who recently moved from our home in Southwestern Ontario (GTA) to Baker Lake, Nunavut.

We hope this blog will give you insight into our journey as we adjust to living in the far North.

Come along for an adventure with us - it will include sarcasm, cheesy puns and fresh-baked goods.